Engage in other cultures. Study languages from around the world. Get ready.

Develop a sense of global interconnectedness with our Department of Modern Languages. Immerse yourself in diverse languages, cultures and literature, and prepare for a career in an ever-changing world.

Gain a global perspective while studying such modern languages as Spanish, French, Italian, Arabic and Russian. Choose from a major in Spanish, pairing a Spanish major with a concentration in adolescence education, a minor in Spanish or Latino studies, and a Spanish concentration as a child study major.

Develop invaluable skills in communication, public speaking, critical thinking, problem-solving, human relations and research. With a wide range of skills, those who study modern languages prepare for careers in business, communication, government, international relations, interpretation and translation, journalism, nursing and teaching, among others.

Get ready for a world of vast opportunities with our Department of Modern Languages. 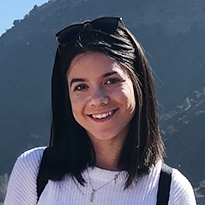 Sonia Dias ’20
Spanish Major with a Concentration in Adolescence Education

"The modern languages department at St. Joseph's gave me a strong foundation to go to Granada, Spain, and flourish. I was able to hone in on my fluidity of speech in order to maintain a more natural conversation. Living in a Spanish-speaking country gave me the opportunity to see the nuances of the language in action. Experiencing the culture and language firsthand created a far deeper connection to Spanish than I could have ever gained from a textbook. It was such an enriching experience that will allow me to be able to teach more authentically moving forward in the future as a teacher."

Study Abroad: Global study trips allow our students to actively engage in other cultures and languages outside the classroom. Past trips have included such destinations as Argentina, Cuba, Spain and Nicaragua.

Receive an M.A. in Education: Pursue the job of your dreams while earning an M.A. in Childhood or Adolescence Special Education with an Annotation in Severe and Multiple Disabilities, with a content specialist extension in Spanish. Apply at the end of your sophomore year so that you have enough time to plan ahead.

Open to All: The Spanish program on our Long Island campus is open to both heritage and non-heritage speakers, as it provides all students the chance to develop and advance their language skills.

Learn more about our Modern Language degrees and programs

Spanish Major
Gain the skills you need to succeed.

A B.S. in Spanish opens the doors to careers in translation and interpretation, business, law, communications, government, international relations and education.

Spanish Major with a Concentration in Adolescence Education
Prepare to educate and instruct.

Prepare for a career in teaching at the middle and high school level, and help others develop a sense of global interconnectedness.

Explore the rich histories and contemporary life of Latino communities in the United States. Gain a nuanced understanding of the diversity of the Americas. Learn about Latin America’s vibrant ethnic and cultural diversity in connection with the region’s historical and political relationship with the U.S.

Study the areas of Spanish literature and culture that interest you. A minor in Spanish complements such majors as psychology, criminal justice, business, and hospitality and tourism management, among others.

Spanish is one of the most-spoken languages in the United States. Enrich your teachings and broaden your job opportunities with a concentration in Spanish.

Ask the Department of Modern Languages Chair a Question

The department offers faculty-led study abroad programs in Cuba, Argentina and Nicaragua. Here, students participate in a trip to Havana, where they visit historic and cultural places and attend master classes designed and taught by the University of Havana professors for SJC students. The “salsa learning experience”, in which students learn basic steps of salsa and other Afro-Cuban dances, is certainly the highlight of this Cuban exploration! This is a unique opportunity to renew your Global Passport and embark upon a life-changing cultural adventure!


Learn about SJC's Study Abroad Conference, in which our students always participate after coming back from our faculty-led study abroad trips and study abroad programs.